The Oregonian is reporting Portland Police Chief Mike Reese knew long before the federal investigation that his policy was too permissive and was a tragedy (or several) waiting to happen, but that he failed to act. Now, the Department of Justice is forcing his hand to rewrite policy and tighten the reins on Taser use that far outpaces use in similar cities. 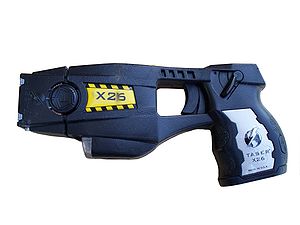 Deputy City Attorney Dave Woboril says he has drafted new Taser policies for Chief Reese over the years, to no avail. “You’re going to have to ask the chief why he didn’t move on it earlier,” Woboril says.

Instead of changing policy, the department seemed to reiterate important Taser practices at training, but that’s all. Also, amidst claims that the police were using their Tasers at inappropriate times and firing multiple rounds when it wasn’t needed—Reese actually gave officers Tasers with longer darts, allowing them to deploy the electric jolts from further away, this just in 2011.

The DOJ says formally that the Portland Police Department uses Tasers too often against the mentally ill, and fires multiple cycles from the Tasers when it simple isn’t needed. They aren’t giving someone enough time to recover from the shocks and comply with orders before firing another round.

The problem, they say, is the policy, which lacks clarity and has led to confusion among officers and even police officials. Through reviewing case files, the DOJ determined there were “numerous incidents” where police deployed Tasers against policy rules.

Chief Reese, wrote to the Oregonian in response to the Taser investigation, stating he didn’t change policy because he knew the DOJ would want to weigh in on the final approved policy. Instead, “we continued putting our efforts into training and working toward crafting a policy that will be reviewed not only by the DOJ, but also by community members.”

Current policy allows Portland police to use their Taser when a person either engages in or merely “displays the intent to engage in” physical resistance.

Woboril is yet again drafting another Taser policy. This one, however, may be embraced by Reese considering the federal pressure he is feeling to amend the current vague and problematic one on the books.

If you are charged with resisting arrest, assault on an officer, or even disorderly conduct—we may be able to help. Contact our offices today to discuss your case and your legal options.