Gift cards intended for disabled children were stolen and used for things like a Wii and a camera in this recent case from Multnomah County.

Forty-six year old Laurie Ann Wilhelm ended up pleading no contest to the charges against her once she saw the 10 witness called by the prosecution. Though she maintained her innocence she stated she would’ve convicted herself had she been in the jurors’ shoes. 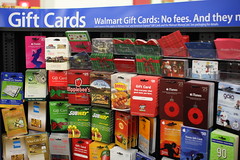 Wilhelm was formerly employed by OHSU. While she worked there in the accounting department, 200 gift cards were stolen, cards meant to go to the families of disabled kids who had participated in research surveys. With a total valued at over $3,000 the cards each ranged from $5 to $40.

Store surveillance cameras caught Wilhelm, or someone resembling her, redeeming the Fred Meyer’s gift cards. She used her credit card occasionally to make up any balance and even used her Fred Meyer Rewards Card to “rack up bonus points.”

Wilhelm maintained to the end that the cards she spent were received from former coworkers as housewarming gifts and that she was innocent of the charges against her.

Considering the probable value of these cards, Wilhelm seems to have got off relatively easy, being sentenced to 20 days in jail and 3 years of probation for 15 counts of theft.

More than likely, the judge was somewhat lenient because Wilhelm had no criminal record. As a first time offender, judges are more likely to give you a slightly softer sentence.

How you are charged for a theft offense depends on the value of the item in question. Because Wilhelm faced more than 15 charges of theft we can assume the prosecution didn’t just add up the value of the cards and charge her once.

If they had, that $3,000 value of gift cards would have warranted a single charge of theft in the 1st degree. This is considered a Class C felony and punishable by up to 5 years in prison.

No matter the charge, if you are facing a theft case it can be quite intimidating, especially if this is your first criminal charge. Call me today to discuss the details and we can formulate a plan for your defense.