This November while California is voting whether or not to make marijuana legal, Oregon will be voting on dispensaries. A few years behind California’s influx of weed stores, Oregon’s Measure 74 will finally allow those authorized to possess medical marijuana to purchase it. 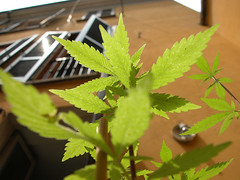 Under current medical marijuana laws, those authorized to smoke must grow the pot themselves or have a caretaker do it for them. Giving a whole new meaning to having a “green thumb”, many patients are not equipped nor botanically gifted enough to grow the kind of marijuana they want to be smoking.

This measure would authorize dispensaries to open up and sell medical marijuana, with a few diversions from the rules in California.

First, the dispensaries must have criminal background checks done on their employees. In addition, growers and dispensaries would have to register with the state. Finally, patients who have prescriptions for marijuana in Oregon must carry a state issued identification card, something not done in California.

Opponents are worried that passing this measure will bring the state one step closer to all out legalization. They point to dispensary robberies and other such criminal behavior that they think will increase if the measure passes.

This growing acceptance of all things marijuana related seems to be taking hold across the country. Whether or not the currently controlled substance will eventually be legalized remains to be seen. Until that day, however, unless you have a state id authorizing you to have marijuana for medical reasons, you can be charged with possession if you are caught with it.

Under current laws, if you are caught with less than an ounce of marijuana, you face a non criminal violation and fines. But, if you go just a gram or two over an ounce, you could be looking at felony charges and even prison time.  Sale of marijuana carries even more hefty penalties with more than 5 grams constituting a criminal Class A misdemeanor.

When facing charges of this nature, you may feel elated it isn’t something more serious. But, a criminal record is a criminal record and it’s something that can stay with you forever. If you are up against marijuana charges and in need of assistance—call out attorneys today for some valuable legal advice and a free consultation.