California isn’t the only state hoping to legalize marijuana use this year. Although there is a long way to go before the measure can be voted on, marijuana legalization supporters are working to get an initiative on the ballot in Oregon this November as well.

The Oregon’s Secretary of State’s office certified a petition drive last month pushing the legalization of marijuana. Now, supporters have to get over 80,000 signatures before July 1st in order to see the item up for vote come November. 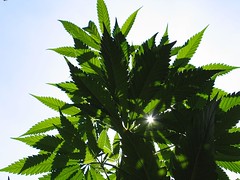 Like marijuana activists in other states around the country, Oregonians point to the potential tax revenue and cuts in crime costs as benefits for the state. Opponents, however, question the safety of the substance and are quick to point out how legalization would run in opposition to federal laws.

Supporters have been holding signature drives across the state in hopes of reaching their goal before the summer deadline. According to one source, however, their chances don’t look good.

The Oregon Catalyst states that their own survey of 988 Oregonians shows that 85% oppose legalization with only 15% supporting. Nationally, they point out those numbers are quite different with only 55% in opposition. It isn’t clear how their numbers were gathered or if they are reliable. If they are, however, petitioners are facing an uphill battle.

Currently, though Oregon does have medical marijuana laws, you can be charged with a violation. You will only face a fine if you are caught with less than 1 ounce, but those penalties are quite different when you pass than threshold.

Possession of marijuana, more than one ounce is considered a felony charge. While it isn’t likely, you could serve up to 10 years in prison for this charge. Of course if you are charged with possessing 2 ounces, your sentence will likely be far less than if you are accused of having 2 pounds, for instance.

Regardless of the exact charge against you, marijuana is still very much illegal in Oregon. If you are facing charges like these, contact a criminal attorney to discuss the defense options available to you under the current laws.