Oregon voters will potentially be making some law changes this fall. As the Statesman Journal reports, several initiatives have qualified for the ballot, leaving voters in charge of some critical changes to DUI law and medical marijuana issues. Over 80,000 signatures were received by the Secretary of State Kate Brown, qualifying these issues for the ballot.

First up is a change to existing sex crime laws. Voters have the opportunity to create a mandatory minimum sentence of 25 years for a series of 4 sex crimes. This mandatory minimum would seek to penalize repeat sex offenders by requiring they serve at least 25 years on the 4th conviction. 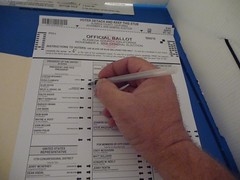 Another ballot issue would allow the Department of Human Services to come up with a licensing process for marijuana dispensaries. Currently, though medical marijuana laws allow people to have and grow marijuana with a prescription, it does not allow for the sale of the substance. This would make it easier for registered patients to obtain their medicine.

Finally, at issue is a DUI initiative. This measure, if passed, would require a mandatory jail sentence for a 3rd DUI conviction. It would make this 3rd offense a Class C felony with a 90 day jail term. Under current law, there is no such mandatory sentence.

However, under current law, felony DUII, 3rd offense, does carry some serious potential penalties. This slight change would only serve to strengthen the already tough DUI laws. Under current law you can permanently lose your license for a 3rd offense.

Criminal laws are changing all the time. We often don’t hear much about the changes because voters rarely have a say. Instead, state lawmakers are typically the ones making changes.

Keeping track of what laws are on the books and which have changed can be tricky. Furthermore, reading these laws and making sense of them can be difficult for those people who aren’t educated in the law. This is just one of the many reasons having an experienced defense attorney can really make a difference in your case and your level of confidence when it’s time to face charges.

If you’re facing charges of DUI or any other criminal offense contact our offices for a free consultation on your case and an in depth explanation of the charges against you.